An Evening with Winston Churchill

Hear a dramatic monologue, from Professor Kevin Radaker, in the character of Winston Churchill. Afterward, Radaker will break character and answer questions about Churchill for 15-20 minutes:

The place is the Waldorf Astoria hotel in New York City. The time is March 15, 1946.  Over the course of an hour, Winston Churchill will describe himself to some degree, especially his tastes and his hobbies, and he will recall the trials and difficulties of World War II, especially the dark days of May 1940 and May 1941, when England faced off against Hitler’s Nazi forces alone. In the final minutes of his speech, Churchill will warn his American audience of the growing Soviet threat in Eastern Europe. Along the way, he will offer a great deal of his characteristic humor and wit, as well as his famous rhetorical eloquence.

Kevin Radaker (PhD, Penn State) is Professor of English at Anderson University in Anderson, Indiana. Since 2016, he has offered his dramatic portrayal of Winston Churchill over 30 times in six states. Since 1991, he has presented his dramatic portrayal of Henry David Thoreau over 400 times around the nation, including six performances in Concord, Massachusetts, Thoreau’s lifelong place of residence. Since 2009, he has presented his portrayal of Christian author C. S. Lewis over 70 times in seven states and at an international teachers’ conference in 2011 in Beijing, China. Besides teaching courses in American Literature and writing, he has published academic articles on Thoreau, Herman Melville, Annie Dillard, and Wendell Berry. To learn more about his dramatic programs, see the following websites, which include video clips and testimonials: www.thoreaulive.com, www.cslewislive.com, and www.winstonchurchilllive.com. 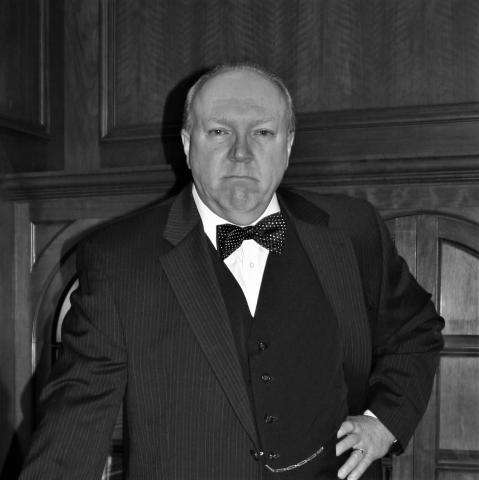